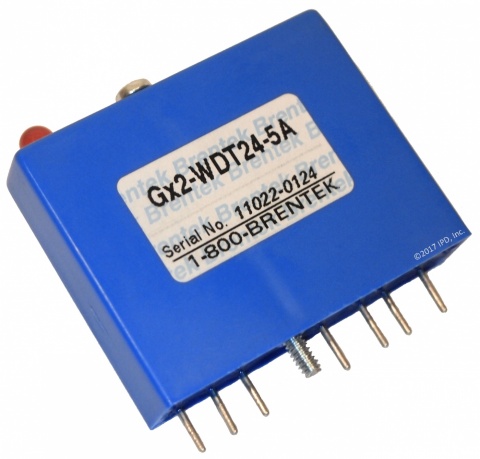 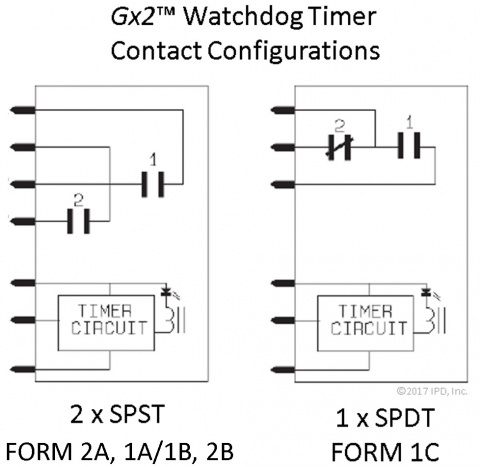 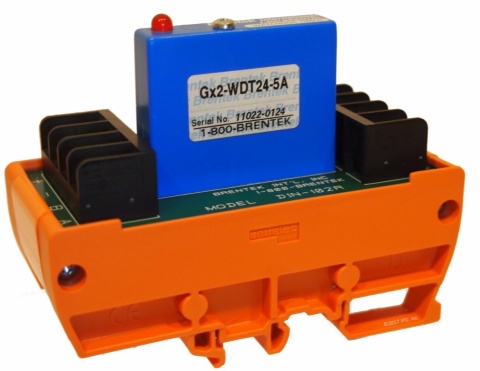 Loss of Control is caused by problems such as CPU latch-up, control system faults, wiring/cabling failure, unanticipated software conditions, communications problems, or power sags/spikes. The system designer can use the watchdog timer's output contact to address Loss-of-Control by energizing an alarm, shutting down the system, or providing a reset signal to the CPU/controller. The Gx2-WDT's other output line can be used to address the fault in additional ways such as switching communications, peripherals, control signals, lockouts, audio/video, indicators etc.

The Gx2TM Dual  Watchdog Timer uses the same patented timing technology to monitor control system integrity as Brentek's G-Series Watchdog Timers. Fixed timeouts are available ranging from 0.1 seconds to 60 seconds and available adjustable timeout ranges are 0.075-5 sec. and 2-8 sec. It is available in standard industrial logic voltages of 5, 12, 15, and 24 VDC:

It is easy to integrate the Gx2-WDT as a stand-alone module with Brentek’s single DIN socket (DIN-102R - not included).  Or, it can be used in combination with up to 22 additonal points of I/O with Brentek's Universal (UNI) and High-density (HDXTM) type I/O Racks.  Brentek's UNI I/O racks offer universal hole patterns that simultaneously accommodate modules from many different Industry-standard I/O systems such as G4, 0.6" Classic, M, and SM - allowing the designer to integrate the Gx2-WDT with a virtually unlimited array of I/O functionality.